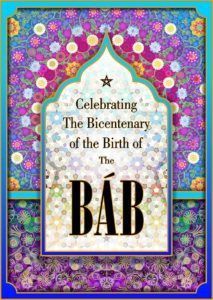 During the month of October 2017, the Baha’is in some 100,000 localities around the world celebrated the Bicentenary of the Birth of Bahá’u’lláh, Prophet-Founder of the Baha’i Faith. October 2019, marks the Bicentenary of the Birth of the Báb, the Prophet-forerunner to Baha’u’llah. The Báb, born in 1819, although two years apart, was born on the day before the birth of Baha’u’llah according to the calendar used in Persia at that time. The celebration of the birth of these Divine Luminaries, whose lives and missions are so closely interwoven, are now celebrated each year by the Baha’is around the world as part of a two day celebration called the Festival of the Twin Holy Birthdays.

Dawn of the Light This film follows the personal search for truth and meaning undertaken by eight people from diverse backgrounds (South Side Chicago, Nepal, Northern Ireland, Tajikistan, Zambia, Chile, an Iraqi living in Austria, New Zealand) and their discovery of two Divine Luminaries, the Báb and Bahá’u’lláh, Whose Divine Revelations are a source of transformation and empowerment for individuals and communities throughout the world. Their journey is explored against the backdrop of the remarkable life of the Báb and Bahá’u’lláh.

Light to the World This film takes you to villages and places around the globe as the people share how their encounter with the Revelation of Baha’u’llah has transformed the life of their communities by bringing about resilience, equality and unity. Vignettes on the life of Baha’u’llah are interspersed throughout.

Bahá’u’lláh (1817-1892), claimed to be no less than the Messenger of God to the age of human maturity, the Bearer of a Divine Revelation that fulfills the promises made in earlier religions, and that will generate the spiritual nerves and sinews for the unification of the peoples of the world. His teachings, centered around the recognition of the oneness of humanity, offer a compelling vision of a future world united in justice, peace, and prosperity.

“The Revelation, which from time immemorial, hath been acclaimed as the Purpose and Promise of all the Prophets of God, and the most cherished desire of His Messengers, hath now, by virtue of the pervasive Will of the Almighty and at His irresistible bidding, been revealed unto men. The advent of such a Revelation hath been heralded in all the sacred Scriptures.” ~Bahá’u’lláh

Who is the Báb?

The Báb (1819-1850), meaning “the Gate,” in 1844 announced that humanity stood at the threshold of a new era–a new cycle of human history and social evolution. The Báb’s mission was to prepare the way for the coming of “Him whom God shall make manifest”, who eventually appeared in the person of Bahá’u’lláh. “Twin Manifestations of God” is a concept fundamental to Bahá’í belief, describing the relationship between the Báb and Bahá’u’lláh. Both are considered Manifestations of God in their own right, having each founded separate religions (Bábi Faith and the Bahá’í Faith) and revealed their own holy scriptures. To Bahá’ís, however, the missions of the Báb and Bahá’u’lláh are inextricably linked, and for this reason, both the Báb and Bahá’u’lláh are revered as central figures of the Bahá’í Faith.
Quotations from the Báb

What did Bahá’u’lláh teach?

Called by different names throughout the ages, the eternal God, the Creator of the universe, is limitless, all-knowing, all-powerful, and all-loving. God is one. The reality of God is beyond human understanding, though we may find expressions of God’s attributes in every created thing.

“Every created thing in the whole universe is but a door leading into His knowledge, a sign of His sovereignty, a revelation of His names, a symbol of His majesty, a token of His power, a means of admittance into His straight Path.” ~Bahá’u’lláh

“To every discerning and illuminated heart it is evident that God, the unknowable Essence, the Divine Being, is immensely exalted beyond every human attribute, such as corporeal existence, ascent and descent, egress and regress. Far be it from His glory that human tongue should adequately recount His praise, or that human heart comprehend His fathomless mystery.” ~Bahá’u’lláh

Beyond all differences of culture, class or ethnicity, regardless of differences in customs, opinions or temperaments, every individual is a member of one gloriously diverse human family. Each unique soul has a role to play in carrying forward an ever-advancing material and spiritual civilization.

“All men have been created to carry forward an ever-advancing civilization. The Almighty beareth Me witness: To act like the beasts of the field is unworthy of man. Those virtues that befit his dignity are forbearance, mercy, compassion and loving-kindness towards all the peoples and kindreds of the earth.” ~Bahá’u’lláh

“The world of humanity is possessed of two wings: the male and the female. So long as these two wings are not equivalent in strength, the bird will not fly. Until womankind reaches the same degree as man, until she enjoys the same arena of activity, extraordinary attainment for humanity will not be realized.” ~‘Abdu’l-Bahá

Humanity’s spiritual, intellectual and moral capacities have been cultivated by the successive Founders of the world’s religions–the Manifestations of God—among them Abraham, Krishna, Zoroaster, Moses, Buddha, Jesus Christ, Muhammad, and most recently, the Báb and Bahá’u’lláh. Each religion originates from God and is suited to the age and place in which it is revealed. In essence, the religion of God is one and is progressively unfolding.

“The door of the knowledge of the Ancient of Days being thus closed in the face of all beings, the Source of infinite grace… hath caused those luminous Gems of Holiness to appear out of the realm of the spirit, in the noble form of the human temple, and be made manifest unto all men, that they may impart unto the world the mysteries of the unchangeable Being, and tell of the subtleties of His imperishable Essence.” ~Bahá’u’lláh

“For every age requireth a fresh measure of the light of God. Every Divine Revelation hath been sent down in a manner that befitted the circumstances of the age in which it hath appeared.” ~Bahá’u’lláh

“The Prophets of God should be regarded as physicians whose task is to foster the well-being of the world and its peoples, that, through the spirit of oneness, they may heal the sickness of a divided humanity.” ~Bahá’u’lláh

“Consort with the followers of all religions in a spirit of friendliness and fellowship.” ~Bahá’u’lláh

A Movement of Personal and Social Transformation

Baha’is around the world, work with their friends and neighbors, including children and youth of their communities, to strengthen the foundation of society through programs that nurture spiritual growth and virtue development, foster amity and unity, and lead to joyful, purpose-oriented lives. These are grass roots, neighborhood-development programs focused on transformation, empowerment and service. People of all ages and backgrounds are invited to participate.

A Rich Tapestry is a video storytelling series that expresses and illustrates how love is being translated into action to address questions of race and culture in the United States. This collection of video stories provides authentic examples of how individuals, communities and institutions are weaving together a rich tapestry of community life in neighborhoods across America. We hope that they spark conversations and help you to envision the wondrous possibilities of a community life that transcends differences of race and culture. The development of such communities is not only assured but is daily advancing.

The first videos in the collection include:
●A Rich Tapestry: how issues of race and culture are being addressed through the work of building communities on a spiritual foundation.
●Refresh and Gladden My Spirit: how two women who came together through prayer built a relationship of shared service.
●It’s About Service: how one community’s youth service project brought together immigrants from various African countries who overcame cultural differences to serve.
●The Bahá’í World View: how the Faith’s core teaching of the oneness of humanity is being translated into reality through a framework of community-building activities.

“O SON OF SPIRIT! Noble have I created thee, yet thou hast abased thyself. Rise then unto that for which thou wast created.” ~The Hidden Words of Bahá’u’lláh

” The Great Being saith: Regard man as a mine rich in gems of inestimable value. Education can, alone, cause it to reveal its treasures, and enable mankind to benefit therefrom.” ~Bahá’u’lláh

The writings of the Báb and Bahá’u’lláh are considered by Bahá’ís to have been revealed by God. As the creative Word of God, these sacred writings have the power to touch the deepest recesses of our hearts and transform us and the world around us. The Bahá’í writings address the needs of the age and offer inspiration for individuals working to better themselves and their communities. Bahá’u’lláh enjoined His followers to read daily from the Sacred Texts.

“Immerse yourselves in the ocean of My words, that ye may unravel its secrets, and discover all the pearls of wisdom that lie hid in its depths.” ~ Bahá’u’lláh

“O SON OF SPIRIT! My first counsel is this: Possess a pure, kindly and radiant heart, that thine may be a sovereignty ancient, imperishable and everlasting.” ~The Hidden Words of Bahá’u’lláh

Prayer, offered both in private and in the company of others, is regarded as essential spiritual nourishment, providing inspiration for positive personal and social change. As part of a private prayer practice the Baha’is choose one of three daily obligatory prayers. In the Baha’i Faith there are no sacraments and virtually no rituals. At devotional gatherings scripture may be read from the Baha’i sacred writings as well as other holy books such as the Bible and the Quran. Baha’is use the prayers revealed by the Báb, Bahá’u’lláh and ‘Abdu’l-Bahá. There is no congregational recitation of prayers unless the prayer has been put to music and is sung. Others may be invited to offer a prayer from their spiritual tradition as well.

“All effort and exertion put forth by man from the fullness of his heart is worship, if it is prompted by the highest motives and the will to do service to humanity.” ~‘Abdu’l-Bahá

“Gather ye together with the utmost joy and fellowship and recite the verses revealed by the merciful Lord. By so doing the doors to true knowledge will be opened to your inner beings, and ye will then feel your souls endowed with steadfastness and your hearts filled with radiant joy.” ~ Bahá’u’lláh

The affairs of the Bahá’í community are administered without clergy, through institutions, established by Bahá’u’lláh to foster universal participation and to diffuse knowledge, love, and unity. Non-partisan elections and collective decision-making are hallmarks of Bahá’í administration. The spiritual and administrative centre of the Bahá’í Faith and seat of the Universal House of Justice, is located in Haifa and Acre, Israel.

“Take ye counsel together in all matters, inasmuch as consultation is the lamp of guidance which leadeth the way, and is the bestower of understanding.” ~Bahá’u’lláh

Baha’is represent a cross-section of humanity, numbering over five million, from more than 2,112 different ethnic and tribal groups living in over 116,000 localities throughout the world. The Baha’i Faith is now recognized by the Encyclopædia Britannica as the second most widely spread independent religion in the world, after Christianity. The worldwide Bahá’í community may be the most diverse body of people on earth. It is among the world’s most unified organizations, which may be its most distinguishing characteristic: It functions as a world community united in vision and action with “unity in diversity” as its watchword.

“In reality all are members of one human family…Humanity may be likened unto the vari-colored flowers of one garden. There is unity in diversity. Each sets off and enhances the other’s beauty.”~‘Abdu’l-Bahá

Meet Baha’is near you:

Find Baha’i Communities in Ohio and the continental U. S.