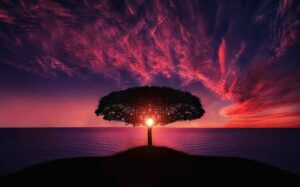 The Baha’i day ends and a new one begins at sunset. Why sunset? The entire calendar system used in the Baha’i Faith is based on the solar system, the sun, which is a symbol for God. With the day beginning at sunset, we can say we begin in the dark and move towards the light. The day is just like our life. We begin in the darkness of ignorance, and move gradually towards the light of certitude. onebahai.blogspot

Since the earliest beginnings of human history, the measurement of time has been fundamental to the organization of societies. The adoption of a new calendar in each religious era is a symbol of the power of divine revelation to reshape human perception of material, social, and spiritual reality. Through it, sacred moments are distinguished, humanity’s place in time and space reimagined, and the rhythm of life recast. Bahai.us

Note: Because the Baha’i Faith is the youngest of the World Religions it may be the only World Religion that knows the exact time of day that significance events in the history of its Faith took place. This makes the observance of Baha’i Holy Days rather unusual. Your Baha’i neighbor might be getting up at 3:30 A.M. to go to a 4:00 A.M. (3:00 A.M. is adjusted to 4:00 because of daylight savings time) for an observance of the Ascension of Baha’u’llah. If you’re awake at that time you are welcome to join us.

Naw-Rúz (March 20 or 21): The Baha’i New Year’s Day coincides with the spring equinox in the northern hemisphere. Naw-Rúz is an ancient Persian festival celebrating the “new day” and for Baha’is it also marks the end of the annual 19-Day Fast.

Festival of Ridván The annual Baha’i festival commemorates the 12 days when Bahá’u’lláh publicly proclaimed His mission as God’s messenger for this age. Elections for local, national and international  Baha’i institutions are generally held during the Festival of Ridván. The first (April 20 or 21), ninth (April 28 or 29) and twelfth (May 1 or 2) days are celebrated. What Are Ridván Baha’i Elections? | (Resources)

Declaration of the Báb (May 23 or 24): This Holy Day commemorates May 23, 1844, when the Báb, the herald of the Baha’i Faith, announced in Shiraz, Persia (now Iran), that He was the Herald of a new Messenger of God. The Báb’s Declaration took place at two hours and eleven minutes after sunset so it is often commemorated in the later evening hours. (Resources) | Story Telling & Musical Celebration Luke Scott

Ascension of Bahá’u’lláh (May 28 or 29): Baha’is observe the anniversary of the death in exile of Bahá’u’lláh, the founder of the Baha’i Faith, on May 29, 1892, outside Akko (also known as Akka or Acre), in what is now northern Israel. Bahá’u’lláh passed away at approximately 3:00 A.M. but because of daylight savings time it is often observed at 4:00 A.M. (Resources)

Martyrdom of the Bab (July 9 or 10): The holy day commemorates the anniversary of the execution of the Báb (Siyyid ‘Ali-Muhammad), the herald of the Baha’i Faith, by a firing squad on July 9, 1850, in Tabriz, Persia (now Iran). The execution took place at noon but because of daylight savings time the observance may be held at 1:00 P.M. (Resources)

The Festival of the Twin Holy Birthdays The Birth of the Báb (October 20, 1819) and the Birth of Bahá’u’lláh  (November 12, 1817) occurred on consecutive days according to the Islamic lunar calendar (1 and 2 Muharram, respectively). These Holy Days are celebrated on the first and second days of the eighth lunar month after Naw-Rúz, and may fall as early as October 20-21 and as late as November 11-12.

Day of the Covenant (Nov. 25 or 26): The festival commemorates Bahá’u’lláh’s appointment of His eldest son, ‘Abdu’l-Bahá, as the Center of His Covenant.

Ascension of ‘Abdu’l-Bahá (Nov 27 or 28): Baha’is observe the anniversary of the death of ‘Abdu’l-Bahá, eldest son of Bahá’u’lláh and His appointed successor, who served as head of the Baháʼí Faith from 1892 until 1921. He passed away on Nov 28, 1921, in Haifa, Palestine (now Israel). This holy day is observed at 1:00 A.M. (The date of observance is determined by the spring equinox in the northern hemisphere.) The Passing of ‘Abdu’l-Baha | The Funeral Procession

Ayyám-i-Há or Intercalary Days (floats between Feb. 25 and March 1): are devoted to spiritual preparation for the Fast, hospitality, charity and gift giving. They are celebrated during the four or five days before the last month of the Baha’i year.

The Nineteen Day Feast, the primary community gathering for Baha’is in each town and city, is held on the first day of each Baha’i month.