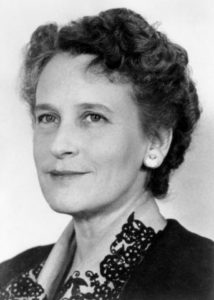 Dorothy Beecher Baker (Video) was a member of the group termed the Hands of the Cause of God who were a select group of Bahá’ís, appointed for life, whose main function was to propagate and protect the Bahá’í Faith. Unlike the members of the elected institutions and other appointed institutions in the Bahá’í Faith, who serve in those offices, Hands are considered to have achieved a distinguished rank in service to the religion.[1] Baker was among those in the first contingent, appointed 24 December 1951 by Shoghi Effendi, then head of the religion.

Baker was a great-granddaughter of Harriet Beecher Stowe, the author of Uncle Tom’s Cabin.[2]

Before being named a Hand of the Cause

At the age of 13 years old, her grandmother, a Bahá’í, took her to New York to see ‘Abdu’l-Bahá who was then on a extended trip to the West.[3] About on her 15th birthday she took official steps to be recognized as a Bahá’í. She went to college at New Jersey State Normal School at Montclair where she graduated in 1918 as a teacher and was employed by the Newark school system. In June 1921 she married Frank Baker who had two children and in 1922 she had an additional daughter and a son in 1923. In 1926 she was first elected to the Bahá’í Local Spiritual Assembly of Buffalo NY where they then lived. The family moved to Lima, Ohio in 1927 and in 1928 she was a delegate to the national convention following which she dedicated herself more to the service of the religion. She was first elected to the National Spiritual Assembly in 1937.[4]

Baker participated in leadership roles in several initiatives of the Bahá’ís before World War II. Among the two highest priority were undertaking `Abdu’l-Bahá’s call through the Tablets of the Divine Plan to spread the religion throughout Latin and South America and addressing racism in America. Baker was named chair of the Inter-America Committee of the Bahá’í National Spiritual Assembly of the US, responsible for many aspects of an initiative of the religion to spread the religion into Latin and South America[5] and in 1939 she was also appointed by the national assembly to the Race Unity Committee along with Louis George Gregory[2] which she chaired from 1941–44 when she also served on the Bahá’í National Spiritual Assembly of the United States and Canada on which she ultimately served sixteen years.[6] The committee stressed the role of education and culture, gave parents recommendations for educating their children in the spirit of racial equality, and encouraged the study of African American culture.

Baker was instrumental, for example, in establishing the College Speakers Bureau for the committee on Race Unity. During these four years, through this bureau’s work, she spoke to more than 60,000 students in 54 colleges and schools in 20 states.[6] From 1937 to 1946 Baker made six trips through Central and South America. Because of her background in speaking to many audiences Baker was regarded as one of the best Bahá’í speakers in the United States.[7]

Baker’s daughter, Louise Baker, pioneered to Colombia in earlier 1943.[8] In later in 1943 Dorothy spent a month in Colombia visiting the Bahá’ís and her daughter.[9] Later in 1945 and again early 1947 Baker was one of a number of notable Bahá’ís who traveled through Mexico.[5]

Starting in 1946, following World War II, Shoghi Effendi drew up plans for the American (US and Canada) Bahá’í community to send pioneers to Europe.[10] Delaying her personal Bahá’í pilgrimage, Baker undertook a trip from 1948 across Europe including visiting Norway, Sweden, Denmark, Holland, Belgium, Luxembourg, Switzerland, Italy, Spain, and Portugal (where she again visited her daughter.)[6][8] See Bahá’í Faith in Europe.

Baker was a representative of the US National Assembly to 1951 convention to elect the regional assembly to oversee the religion across Mexico through Latin America to Panama and the West Indees.[11][12]

During a second trip through Europe and the second in 1951 Baker was appointed as a Hand of the Cause.[6]

After being named a Hand of the Cause of God

Baker attended the second convention of the regional assembly of Latin America which was held in San Jose, Costa Rica in April 1952[13][14] – her last journey to the region.[6]

In February 1953 the first inter-continental conference of four designated by Shoghi Effendi took place in Uganda. Baker was on the program along with `Alí-Akbar Furútan, Ugo Giachery, Hermann Grossman, `Alí-Muhammad Varqá, George Townshend, and Dhikru’llah Khadem giving a wide variety of talks and classes across 7 days.[15] Baker made her Bahá’í pilgrimage just before the conference after delaying it twice in earlier years in order to provide service in her travels.[6]

At a follow-up conference for the initiatives in Europe, in Stockholm in August 1953, Baker asked for a Bahá’í to settle in Andorra and French-born William Danjon Dieudonne volunteered. He left his home in Denmark and arrived in on 7 October 1953 and so was listed as a Knight of Bahá’u’lláh thereafter.[16]

Baker spoke at a variety of events in India extending her stay twice to speak at schools – her last public talk was in Karachi in early 1954.[6] In January 1954 it was announced Baker had died in a plane crash near the island of Elba en route to Rome from Pakistan where she had toured after helping an international conference in India.[17] The plane, BOAC Flight 781, had taken off at 4:30 a.m., Lima time, Sunday, on its way to London, and crashed in the sea about 40 minutes later.[4] She had had plans to continue her trip from Rome to Paris, New York, and from there to a pioneering post with her husband Frank Baker[6] in St. Charles, Grenada, West Indies.