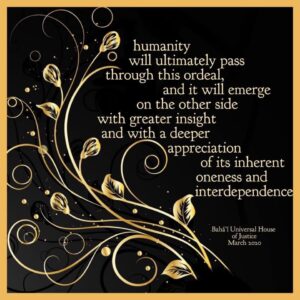 “Be anxiously concerned with the needs of the age ye live in, and center your deliberations on its exigencies and requirements.” ~ Baha’u’llah

Baha’is reflect on the current global crisis:
Forging A Path Toward Racial Justice article
The Coronavirus Pandemic: Stepping Stone, or Stumbling Block? video
A Principled Approach to Solving Global Challenges video
Collective Threats Require a New System of Global Governance video
Blog: A Whole New World: 7 Virtues for the Great Reset – Justice article
Building a World Federation: The Key to Solving Our Global Crises video
Can Global Crisis Lead to Global Unity article
Reflections on the Coronavirus and the Oneness of Humanity article
Will It Take a Pandemic to Make the World Economy Human article
Income Disparity In a Time of Global Crisis article
(additional videos)

“We cannot segregate the human heart from the environment outside us and say that once one of these is reformed everything will be improved. Man is organic with the world. His inner life moulds the environment and is itself also deeply affected by it. The one acts upon the other and every abiding change in the life of man is the result of these mutual reactions.” — from a letter on behalf of Shoghi Effendi

Conservation of the Earth’s Resources The approach of the world-wide Bahá’í community to the conservation and protection of the earth’s resources is based on a number of fundamental principles derived from the Bahá’í Writings. (Prepared by the Research Department of the Universal House of Justice – October 1989)

Summoning Our Common Will: A Baha’i Contribution to the United Nations Global Development Agenda (BIC 13 October 2015) To craft a development agenda that is “accepted by all countries” and “applicable to all countries” is to acknowledge the interdependence and fundamental oneness of the human race. Development is increasingly understood as a process that must benefit all and draw on the talents and capacities of all. It is not without significance that Agenda 2030 uses the term “universal” 29 times in 29 pages. A sense of common cause has been placed at the heart of the global development agenda, reflecting growing commitment to the premise that every member of the human family has not only the right to benefit from a thriving global civilization, but also the capacity to contribute to its construction. Consciousness of the oneness of humankind must be the bedrock of any strategy that seeks to engage the world’s population in assuming responsibility for its collective destiny.

World Citizenship: A Global Ethic for Sustainable Development (BIC 1993) The challenge of sustainable development is to inspire in people the willingness to think and act differently – the desire to become responsible citizens of an interdependent world. Fostering world citizenship is a practical strategy for promoting sustainable development. So long as disunity, antagonism and provincialism characterize the social, political and economic relations within and among the family of nations, a global, sustainable pattern of development can not be established.

Sustainable Development and the Human Spirit (BIC 1992)
…a true resolution of the dangerous state of affairs in the world can only be realized when the spiritual dimension of human nature is taken into account and the human heart is transformed.

Seizing the Opportunity: Redefining the Challenge of Climate Change (BIC 2008)
The search for solutions to climate change has revealed the limits of traditional technological and policy approaches and has raised difficult questions about justice, equity, responsibility and obligation. As communities and policy-makers worldwide have wrestled with these questions, they have brought us all to the threshold of a tremendous opportunity. It is the opportunity to take the next step in the transition from a state-centered mode of interacting on the world stage to one rooted in the unity which connects us as the inhabitants of one biosphere, the citizens of one world and the members of one human civilization. The nature of this step, its significance and some of the means for its accomplishment are the focus of the Baha’i International Community’s contribution to forging a path out of the climate change challenge.

Nature: A selection of readings, essays, and resource materials on the subject of nature.

Bibliography of Recommended Reading see also: Eleven by Paul Hanley Eleven billion people will share this planet by century’s end. Adding 4 billion to an already overburdened world will force everyone to change everything. Eleven is a call to consciousness. Only and ‘ethical revolution’ will allow us to carry forward an ever-advancing civilization. Paul Hanley proposes a transformational model that will help individuals, institutions, and communities make an eleven-billion world work for everyone–and the planet.

Timeline of Baha’i-associated Events and Environment

Rethinking Prosperity: Forging Alternatives to a Culture of Consumerism (BIC 2010)
In this statement, the Bahá’í International Community writes that a culture of consumerism has tended to reduce human beings to competitive, insatiable consumers of goods and to objects of manipulation by the market. A more profound look at human nature, the statement suggests, would reveal the ability of human beings to respond to a higher calling.

A New Framework for Global Prosperity (BIC 2006)
Poverty can be defined as the absence of resources — physical, social, and ethical — necessary for the establishment of conditions, which promote the moral, material, and creative capacities of individuals, communities, and institutions.

Science, Religion and Development: Some Initial Considerations (2008)
A statement prepared by the Institute for Studies in Global Prosperity, an entity dedicated to the systematization of knowledge generated by individuals and organizations promoting the prosperity and well-being of the peoples of the world.

Education and Training for the Betterment of Society (BIC 2011)
The human being is not only an economic and social creature but also a spiritual one with free will and a conscience that enables the search for meaning and for truth. Without the freedom to pursue this fundamentally human quest, neither dignity, nor justice, nor development—in its full sense—is possible.

Youth and Adolescents Education in Service of Community (BIC 2012)
The concept of a two-fold moral purpose—to develop one’s inherent potentialities and to contribute to the transformation of society—provides an important axis of the educational process.

Women and Men: Partnership for a Healthy Planet (BIC 1991)
It is our conviction that the unification of the human race depends on the establishment of the equality of men and women. Humanity, the Bahá’í­ Writings explain, having passed through the stages of infancy, childhood, and turbulent adolescence, is now approaching maturity, a stage that will witness “the reconstruction and the demilitarization of the whole civilized world – a world organically unified in all the essential aspects of its life.

Transforming Collective Deliberation: Valuing Unity and Justice (BIC 2010)
Actively soliciting views from those traditionally excluded from decision-making not only increases the pool of intellectual resources but also fosters the trust, inclusion and mutual commitment, needed for collective action…On its own, however, a diversity of perspectives does not provide communities with a means to bridge differences or to resolve social tensions. In consultation, the value of diversity is inextricably linked to the goal of unity. This is not an idealized unity, but one that acknowledges differences and strives to transcend them through a process of principled deliberation.